The History and Mystery of the SA Milkman 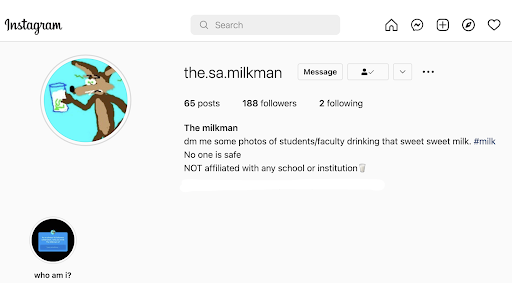 These two core Instagram accounts were once the only ones that were on students’ radar. Until December 1st 2021, when a student posted a photo of freshman Kellen Kramer drinking milk at lunch.

This anonymous student became known as The SA Milkman (@the.sa.milkman). Kramer said of that first post, “I thought it was a terrible photo. But it was kind of funny, not gonna lie.” The post gained 16 likes on the account at the time but popularity soon grew. By the sixth post, they had 60 likes. News spread around the school like wildfire. Soon everybody knew about The SA Milkman.

Thirteen days after their sixth post The Milkman reached a “milestone” of 50 followers. He posted a poll on his story asking his followers who they thought he was. All of the guesses were ridiculous, with not one serious answer. It seemed no one even tried to figure out the mystery.

That’s what inspired the Sonoma Academy Detective (@sa_milkman_detective). “The SA Milkman did not show his or her face and most Instagram accounts usually, you know, show a face. It just bugged me,” he said, when asked why he started the account.

The Detective’s opinion of The Milkman also depended on the fact that he–The Detective–had never been featured on the page, despite having milk every day for lunch. The Detective’s first post was a threatening message typed on a computer saying, “SA milkman, I am Coming for you,” to which the Milkman responded, “We’re waiting.”

This new account was just as unexpected as The Milkman was. Some students felt that the integrity of the Milkman would be lost if the identity was discovered. Freshman and self-proclaimed “hater” of the SA Detective, Chad Smith, for example, said, “He is a menace to this world and shouldn’t be here. Hence why I found out who he was.” However, others thought it would add on to the joke. The debate of whether the detective page was genius or unnecessary is still ongoing today.

No matter what side you’re on, The Detective’s first post was strategic and proved his intelligence. By posting such a provoking message he drew the Milkman into a response, giving the SA Detective his first piece of information: The Milkman was a “we” not a “he.” The Detective proceeded to gain more information, saying, “I talked with a lot of people. I emailed some people and they knew some people. And that’s how I went.”

Week by week there would be a new post from The Detective revealing new evidence as to the identity of The Milkman. Day by day he was getting closer. “I’d say I got decently close. There’s, like, one lead that I had.” Then something changed: The Detective’s identity was revealed. A shock to many, and the initial downfall of both pages.

Smith created an account where he pledged to protect The Milkman and expose The Detective. Unfortunately for The Detective, Smith succeeded. On February 11th, 2022, the SA Detective’s identity was revealed to all. However, this did not shake him. Rumors say The Detective continues to search for the truth about The Milkman even today. Who knows if he will succeed.

Then, merely four days after the identity was revealed, a tragedy occurred. The SA Milkman posted for his final time, a Valentine’s Day appreciation post. The Milkman called the entirety of SA their Valentine before passing down the mantle to an entirely new person. Followers say that the Milkman’s content has gone downhill since then. Freshman Dane Hansen said, “You know I don’t really pay attention to social media platforms like that. But I believe that the SA Milkman is pretty dumb and he fell off and he’s irrelevant.”

The posts have become repetitive and boring. The Milkman, at this point, should either give up or find new material that could still be milk related so as to keep the integrity of the account.